Distribution network operators (DNOs) are making profits “beyond most companies’ wildest dreams”, the Energy and Climate Intelligence Unit (ECIU) has claimed in a new report.

If they continue to be as profitable this year, the typical household energy bill will be £20 higher than if their margins were similar to those of the big six suppliers, according to analysis by the think tank.

The research found the six DNOs posted an average profit margin of 30.4 per cent in their first annual results since the introduction of the RIIO ED-1 price control (2015 to 2025).

“These businesses are monopolies operating in a non-competitive environment, and the services they provide are essential – therefore, they are among the lowest-risk investments available,” the report states.

“Yet, their profit margins are far higher than in many markets that are genuinely competitive – including energy generation and retailing.”

An earlier study by the think tank found DNOs made an “extraordinarily high” average profit margin of 32 per cent during the previous DPCR5 price control (2010 to 2015), of which around half was paid out as dividends.

The new report, titled RIIO Carnival: How new Ofgem regulations are failing to hit high network company profits, argues “nothing has changed” since the new regulatory framework was introduced in April 2015.

It continues: “Of every £100 received by DNOs, they paid £13.30 to shareholders as dividends, a total of £857 million over the year. This is only slightly lower than the average across the previous six years, when current price control regulations did not apply. Overall profit margins are also alarmingly consistent with previous years”.

The report says shareholders will pocket a total of £5.1 billion over the full price control period, if dividends remain at the same level as 2016. It calls on Ofgem to curb these returns by re-opening the current RIIO settlement or forcing companies to repay “excessive profits” to consumers.

“Ministers, the press and the public are rightly worried about energy bills, and the news that these monopoly operators are making profits beyond most companies’ wildest dreams will only add to these concerns,” said ECIU director Richard Black.

Profits and dividends for 2016 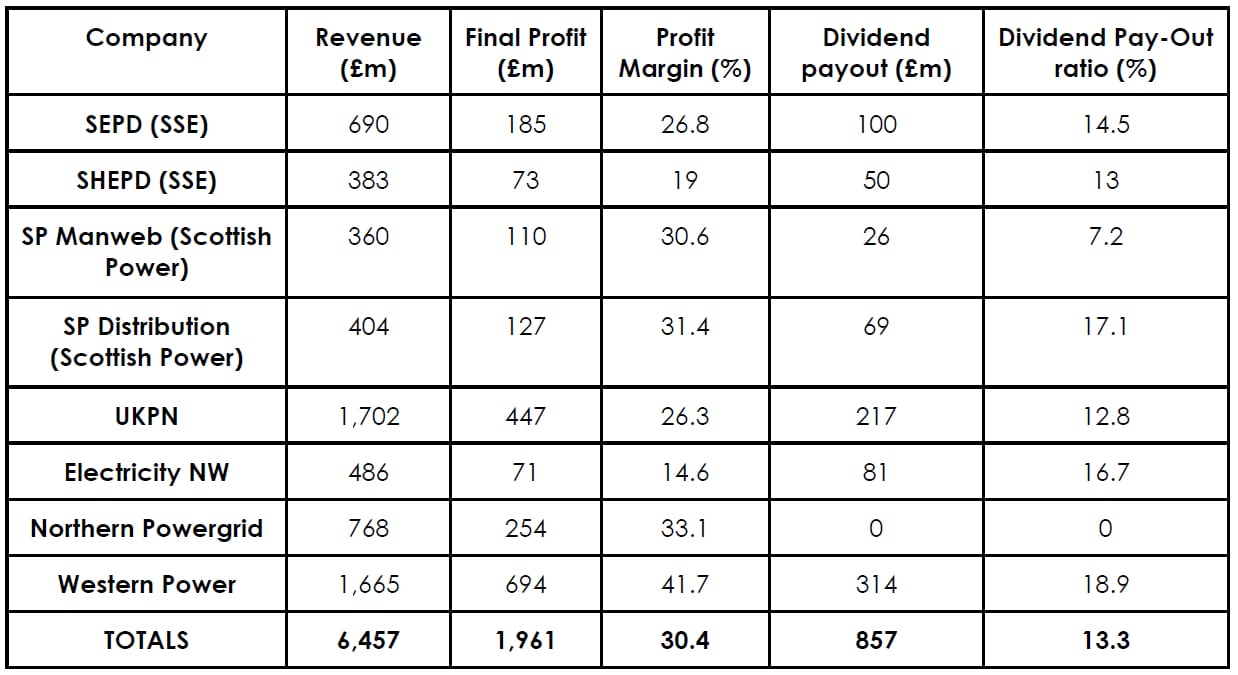 Conservative MP John Penrose, who led calls for a cap on energy bills, commented: “Ofgem has admitted it was asleep at the wheel on energy price caps.  Now it has a chance to do better by using its powers to take on the monopoly DNOs which own the power lines that get energy to our homes.

“The DNOs are low risk, monopoly businesses. But they have even fatter profit margins than the big six energy firms, all paid out of the pockets of hard-working energy customers.

“If Ofgem lets them go on getting fat at energy bill-payers’ expense, it should be scrapped and replaced with a proper cross-sector regulator that isn’t afraid to use its teeth.”

Citizens Advice chief executive Gillian Guy, said: “Electricity distribution companies are making billions more than expected by Ofgem at the expense of consumers, driving up bills at a time when many people are struggling to make ends meet.

“This issue is not limited to electricity distribution companies. Our research shows that across the energy networks market, companies are raking in £7.5 billion in unjustified profits.

“Energy network companies should return this money to consumers, as some companies have started to do. If they don’t return the money, the government should step in to make sure customers receive a rebate.”

Catherine Mitchell, professor of energy policy at the University of Exeter, highlighted the “vital role” of DNOs in the transformation of the energy system: “Whilst many of the firms deserve credit for their work in promoting the transition to smart power networks, Ofgem’s failure to corral companies in the right direction – with these high profit margins appearing instead – places the shift to a modern, flexible grid at risk.”

Responding to the report, the Energy Networks Association said in a statement: “These are once again misleading figures published by ECIU, who make some basic errors in assessing the way that network companies make profits.  Official Ofgem figures show that network costs to the consumer are flat or falling over the next few years.

“ECIU’s analysis is only based on partial data: they do not include the significant reinvestment made. The profits network companies make should be judged over the full eight-year price control period to gain an accurate picture.

“That’s because network companies typically spend different amounts in different years. According to Ofgem figures, £45 billion is forecast to be invested into the energy networks in the next five years.”

A spokesperson for Ofgem, said: “Financial performance so far under some of the initial RIIO price controls has been at the higher end of expectations. Our actions and the design of the price controls have resulted in over £4.5 billion savings for consumers since 2013.

“Adjusting for inflation overall charges to households for electricity distribution have fallen by 5 per cent since 2015 and reliability and customer service have improved. Ofgem expects its next set of price controls to be tougher and result in lower returns for investors.

“Profit margins of network companies and suppliers are not comparable. Networks are asset heavy businesses with large investment requirements. They need bigger margins to finance these investments compared to supply businesses that don’t need to invest so heavily.”

In December, Ofgem revealed that electricity network profits could be subjected to extra scrutiny as part of a potential mid-period review of RIIO ED-1. The regulator was launching a consultation on whether or not to conduct a review and, if so, what issues it should cover.

Earlier in the month, Ofgem senior partner for networks, Jonathan Brearley, urged Northern Gas Networks and Wales and West Utilities to follow the lead of other gas networks by returning some of their profits, saying it was in their own interests to maintain the legitimacy of the RIIO framework. His comments came after National Grid, Cadent, SSEN and most recently SGN all made voluntary contributions to customers.

This site uses Akismet to reduce spam. Learn how your comment data is processed.