I wanted to follow up on the October 12th announcement of an Energy Price Cap. It’s great we’re moving on to think about how, rather than if, we make it happen. Since it’s a draft Bill and the Government is encouraging contributions, I wanted to explain why a relative price cap is a more free-market-friendly alternative instead:

Cap or No Cap?

Some commentators have argued that there should be no cap at all, because any consumer can switch at any time. But that assumes the energy market works in favour of consumers and, as the chart provided by Citizen’s Advice shows, at the moment it doesn’t. 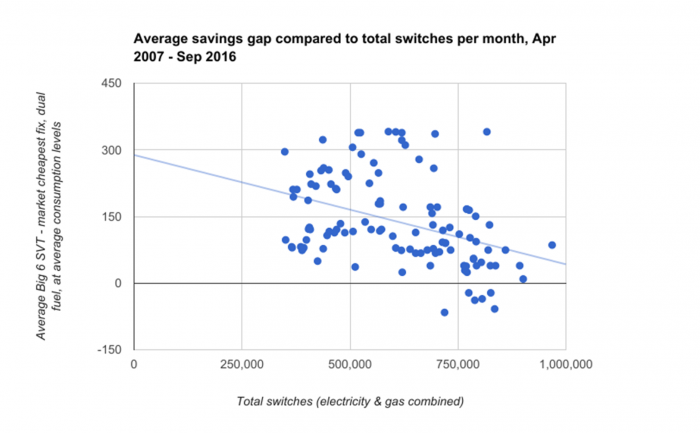 The chart shows a small negative correlation between the size of savings from switching and the number of people doing so. In other words, the amount of switching does not increase as the size of the potential cost savings rises. There is probably a minimum level of cost saving required before people will bother to switch (most market participants estimate £100 is plenty for a typical household contract) but expecting more people to start switching once the size of potential savings becomes large enough won’t work as things currently stand. We need to fix the market’s fundamentals first.

The draft Bill rightly proposes that any cap should only be temporary, whilst we make longer term, structural changes to fix this broken market.  Faster, cheaper, more reliable switching, backed by smart meters and simpler, clearer energy bills are all essential steps which were proposed by the CMA and are being introduced by Ofgem. But these changes will take years to transform the market and, in the meantime, there are 17 million households paying £1.4bn too much for their energy every year. A temporary price cap protects them until the structural changes make rip-offs impossible.

The draft Bill proposes an absolute price cap, where regulators meet every 6 months and pick a number. It’s a highly distorting approach which replaces daily market-derived prices with infrequent regulator-derived ones. The capped prices will not only be out of date as soon as wholesale gas prices change (which happens every day) but will also throttle competition by being far less good at discovering and then meeting consumer needs.

A relative cap fixes a maximum mark-up between each supplier’s best competitive price and their default tariff. That means it protects customers who don’t switch from being ripped off, but still leaves a worthwhile incentive for those that do. It won’t get out of date as wholesale gas prices change, because it is based on the only genuinely market-driven prices in the retail energy sector – the fixed-term switching deals where more than 50 firms vie for customers every day – and competition is kept red-hot by price-comparison sites that continuously advertise the best deals.

Because of these competitive foundations, a relative cap creates a more effective long-term guarantee of low prices and good deals for customers than any price decision by a regulator, however clever and well-intentioned they may be. By forging a link between the highly-competitive part of the energy market, and the currently uncompetitive (and therefore rip-off) default tariffs, a relative cap imports strong competition from fixed term switching deals, and applies it to default tariffs too. It would make energy behave in the same way as any normal product, where those of us who don’t switch (for example) our brand of coffee or cornflakes each week nonetheless benefit from the keen pricing which the manufacturers are forced to apply to attract the business of those who do.

But a relative cap isn’t just an economically superior free-market alternative to an absolute cap. There’s an important political benefit in making the free-market case too. Ed Miliband was quick to claim an intellectual victory when the draft Bill was published last week, drawing parallels between an absolute price cap and his energy price freeze proposals from 2014. Labour’s renationalisation manifesto proposals for energy and other utilities go even further down the same state-intervention road. For a Conservative Government, a relative cap creates clear blue water. It is intellectually distinct and economically better than either Ed Miliband’s or the official Labour manifesto approaches, aligns naturally with the Prime Minister’s speech in September which defended free market capitalism, and frames the choice between competing economic narratives cleanly.

We must remember that the whole point of these reforms is that we’re trying to unleash the talents of the fresh, new competitors – the challenger energy firms.  They want the cap to be relative and temporary, which should tell us we’re on the right track.  Policy Exchange supports the case (click here) and even three of the Big 6 have expressed to me in private their support for the relative as opposed to the absolute model.

Below are the comments given to me by the challenger energy companies and I shall be making these points to the BEIS Select Committee and Ministers over the coming days and weeks.  If you want me to keep you updated, provide you with any more briefing or to discuss this, please call me any time on 07739 386 226.

Greg Jackson, founder and CEO of Octopus Energy: “This relative price cap proposal will turbocharge competition for the benefit of all customers – bringing prices down for everyone. We will finally see which suppliers are efficient and which are not fit for purpose. And that’s what the Big 6 are really scared of: transparency and competition.”

Stephen Fitzpatrick, CEO and Founder of OVO Energy: “We welcome John Penrose’s ‘relative price cap’ proposal as a step in the right direction towards long term fair pricing for all. Creating a link between SVTs and the cheapest tariffs in the market will help everyone benefit from competition, drive more innovation and ultimately lead to lower bills for millions of people.”

CEO of Utility Warehouse, Andrew Lindsay: “We strongly endorse the proposed introduction of a relative price cap. This practical solution will create a fairer energy market and promote competition, whilst helping to protect customers who have little desire to switch supplier on a regular basis.”

Adrian Leaker, Managing Director of PFP Energy: ““[T]he majority of the Big 6 energy suppliers increased their prices for Standard Variable Tariffs, in their words “to cover rising costs”, however at the same time, some of the Big Six have been lowering their prices to acquire new customers on cheaper fixed price tariffs. In our view, this is not treating customers fairly and so we believe a relative price cap is an appropriate action and support curbing this inappropriate behaviour.”

Simon Oscroft, Co-founder of So Energy: “For years, the Big Six have been protecting their market share by fleecing their loyal customers for hundreds of pounds, and charging new customers at a much lower rate. This is clearly not a fair or well-functioning market. A relative price cap would certainly go a long way to address this.”

Amit Gudka Co-founder of Bulb Energy: “We applaud John Penrose’s proposal of a link between SVTs and the cheapest tariff. We believe it will help everyone benefit from lower energy prices and create a fairer and more transparent energy market. At Bulb, we’re dedicated to lowering our costs and passing savings on to our customers and we believe this change would force other suppliers to do the same.”

Phil Levermore, Founder and Managing Director of Ebico: “The relative price cap is a policy which could begin to turn the tide against the big six business model, which has prevailed for the last 15 years, whereby higher margins generated from loyal customers on standard variable tariffs are used to subsidise cheaper prices for switchers.”

“The Big 6 have been ripping off their most loyal customers for years, and it is clear that something needs to be done. The relative price cap is the best way to bring about the change hard pressed energy customers so desperately need.”

Dale Vince, founder of Ecotricity: “A relative price cap is a great idea and something Ecotricity have suggested before.  By dealing with the price gouging of the Big Six and many of new entrants who protest otherwise, it means people will get a better deal. In the current market the cheapest deals are unrealistic to draw in business and the standard deals are unfair on those who don’t switch.  A relative price cap that reduces the difference between the two extremes makes the whole industry more fair.

Chris Bowden, CEO and Founder, Squeaky Clean Energy: “Whilst we are not in favour of an absolute price cap as we believe it would be very difficult to administer and potentially damage competition and innovation in the market, we would welcome a relative price cap.”

Juliet Davenport, Founder and CEO of Good Energy: “For years the plan of the ‘Big 6’ has been to attract new customers with cheap rates and then quietly shift them onto more expensive deals. In fact, a ‘Big 6’ CEO once boasted to me that his company offered both the cheapest and the most expensive tariff on the market.

“This behaviour is not only unfair, it shows a complete lack of respect for your customers. At Good Energy, we support a relative price cap because it’s a simple idea to make the energy market fairer and to stop unscrupulous companies from exploiting their customers.”

Bill Bullen, CEO of Utilita: “The majority of our new customers have fled the Big 6.  Why? Because they are fed up with the way they are being treated and taken advantage of – most were on cripplingly expensive deals when they didn’t need to be. Britain’s hard-pressed families deserve a fair deal. There is a lot of merit in John Penrose’s initial proposals and we welcome the opportunity of working with him on them, because what is absolutely clear is things have to change.”